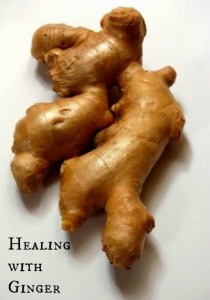 summon within me, a power I’ve never known.

Ginger is known for its crisp and yet spicy flavor and is used in a variety of ways from cooking to Magick. Today let’s take a look at some of the marvelous uses for ginger.

A brief look into the history and uses for Ginger

When you buy ginger, fresh this is best. The fresh root has a great deal more crispness and vitality compared to dry. Dry ginger is best used in baking. Use it in recipes like Ginger Bread, crackers and the making of ginger ale or beer.

Thirsty tavern-goers in England would add Ginger to their mug of ale and stir it with a hot poker. The tradition into the well-known soft drink enjoyed by many today.

In the United States Ginger is usually used in sweeter foods and beverages. Ginger Bread was a staple in American revolutionary war rations, and you might even be served Ginger Jam in the New England states.

Ginger has long been prescribed for a variety of alignments. In the 16th century England it was considered medicine. While Henry the VIII believed that Ginger could cure the plaque. In many cultures, ginger is still considered a “Cure All.”

As it may seem farfetched that a single spice could hold such claims, ginger appears to do so. Many studies have proven the effectiveness of Ginger. In a study conducted by the American Cancer Society, Ginger proved, “to keep tumors from developing”. Many physicians who favor herbal and natural remedies, swear by the effectiveness of Ginger while others will not state such claims. In other studies, ginger also proved to have anti-liver damage properties among other beneficial qualities.

Personally, I swear by Ginger. Especially in the area of digestive alignments and nausea. While I was pregnant with both of my children, I had morning sickness into my third trimester. I tried everything aside from drugs, and Ginger proved the most effective in easing my nausea. When I felt nauseous, I would drink a natural Ginger Ale. I found mine in the organic aisle of my grocery store. The soda was a little spicy but a little went a long way. Soon, I learned to make my own which saved me time and money. Now I use the same recipe for general tummy issues and illnesses.

In the practice of Magick, Ginger is a valuable component. Centuries ago Ginger was almost more valuable than Pepper. Ginger has long been used in the tonic, potions, scent Magick, and as an antidote to some poisons.

For more on the medical benefits of ginger see this article by Mercola: http://articles.mercola.com/sites/articles/archive/2014/06/30/ginger-health-benefits.aspx

Now let’s take a look at the more Magickal aspects as well as some practical uses for Ginger.

Ginger is a great component in spell work for raising your own inner power. Many practitioners make it a tradition to chew a bit of fresh Ginger root before spell work and ritual. It is especially effective in love and healing spells. Keep in mind, little goes a long way. Ginger is potent and spicy.

In my Kitchen, Ginger is an essential Magick component. Ginger is very hot and it will flow through your body quickly making it effective and potent. You will have to practice using this spice before you “get the hang of it”. At first, Ginger may seem like a huge distraction, but as you become more accustom to using it you will be able to use it, effectively.

The following spell is intended for healing and can be adapted for other purposes. Allow yourself to be creative and try Ginger in other Magickal workings. 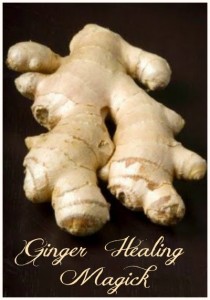 A Green Candle (or you can substitute with white)

Spell Notes: In this spell, you will be using a small open fire other than your lit candle. You will need to take precautions with fire as it will take over if you are not mindful. Firstly, make sure your fire is small and safely contained. Fire is already a hazard and when you add it to spell work where you intend to raise significant energy, it becomes sneaky and volatile.

The instructions of this spell will be explained as though you have already gone through your desired preparations for Spell, Energy work and/or Ritual work. I prefer not to tell you how to prepare yourself and your tools, as this tends to be unique to each tradition and practitioner. So we will begin the instructions of this spell beyond the point of preparation, callings, circle casting, etc.

Begin by lighting your small fire so that it has a healthy flame.

Next work on bringing to mind the specific alignment with the person affected. If you are the subject focus on your alignment.  Your focus needs to be undistracted and as sharp as you can possibly make it.

Once you are satisfied that the ginger is spent, allow your mouth to fill with the remaining ginger juice and your own saliva., Next spit every bit of ginger and saliva out on to your little fire. As you do this envision the root of the illness breaking a part as your spit extinguished the flame.

Turn your focus to your candle and envision the person in question is free from disease. Allow this candle to completely burn out on its own. Once complete, release any remaining energy, then ground and center your own energy to complete the spell.