As we move from summer into fall, I am reminded of the importance of sacrifice. I am reminded that spiritual balance is maintained when we ritualistically give back from which we have taken.

To give something back is a genuine and important act. As we harvest the fruits (and vegetables) from the soil, and as we adorn our tables with this bounty; we should also remember to celebrate the earth’s generosity. With this, I am brought to discuss the value of libation.
A libation in its simplest form can be described as a ritualistic pouring or offering of a sacred or valued liquid into the earth. This act is a symbolic gesture of honor and devotion toward departed loved ones, deities, and the earth herself. Libation is also performed to gain the favor of one’s patron deity. Libation is considered one of the humblest forms ritual.

In most Pagan, Wiccan, and Witchcraft practices the tradition of libation is critical in maintaining a positive balance and relationship with our deities and the energies we call upon. The act of offering something back to these energies puts our needs, desire, and actions into perspective as we acknowledge what is required to gain abundance. We are reminded that we are only one small part of the whole arrangement that creates sustenance. It is through this act of sacrifice, that we understand what it takes remain happy and healthy.

As we look back over the centuries we realize that libations were reserved for the most sacred of fluids, olive oil, milk, honey, alcohol, and in some practices blood. Many traditions conduct libation rituals at the start of the planting season in spring, to ensure a healthy and bountiful crop. One traditional libation I am most familiar with is the one of pouring “Mother’s Milk”. Other libation rituals are reserved for honoring the dead. Entire bottles of bourbon and rum are left on shrines and altars to honor the dead, as well as patron deities.
Libations are an ancient practice. It is believed that libation rituals originated near the upper Nile in ancient Egypt. Libation rituals seemed to then spread from Egypt to Africa, Asia, and into Greece. In the Americas, it appears that native tribes were already performing their own libation rituals, using alcohol as their preferred liquid.
In the examination of libation, we recognize the value of alcohol. Alcohol has long been revered for its intoxicating effects and therefore reserved for celebration and ritual. Today the ritualistic pouring or spilling of malt liquor to honor the deceased is common. It is often referred to as “pouring one out” or “tipping”.

There are some rules about libation you should be made aware. First, it is important to remember that libations are sacred gifts. These gifts and offerings are not for you to consume. I, like many others, prefer to pour libations directly into the ground. Some prefer to leave their libation on an altar in a scared cup or bowl. This tradition usually involves later pouring it to the earth.

Below is my own libation recipe for Mabon as well as Samhain. The intent of this libation is to honor the Goddess. You may also enjoy this as a beverage for yourself in addition to using it as an offering in your own ritual. I find to be especially nice for group rituals since it is pleasant and delicious.
This recipe is made up of several juices as well as Brandy. I wanted to create something that represented Autumn in flavor and color.

Once you mix the recipe you can reserve some for libation purposes and enjoy the rest. Think of it as a toast to autumn, the Goddess, and the bounty we receive. 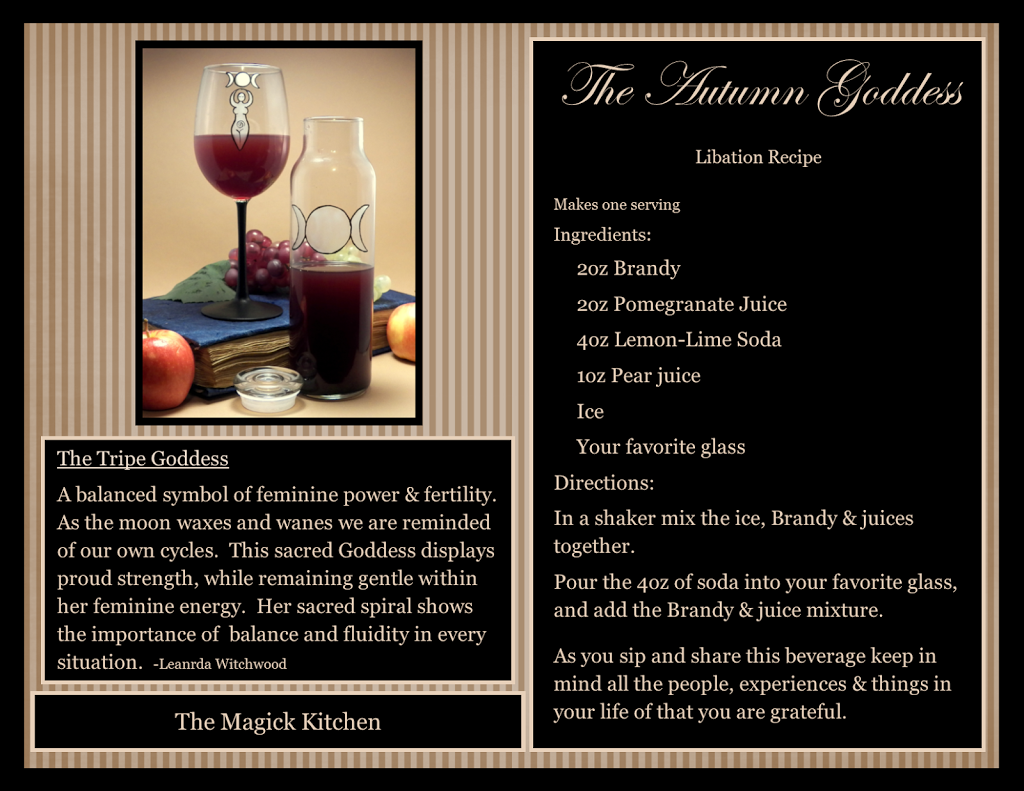 2 thoughts on “Lovely Libations! Alcohol is a Sacred Offering.”