Now that I have given you a few Cob Butter recipes it is time to focus on the Magickal and spiritual aspect of Corn.

The Magickal Aspects of Corn

Corn is a clear indication of summer and the bounty of the harvest for many Witches. It is a symbol of fertility and is often used to invoke Mother Earth.

Whether it is used as a centerpiece, a wreath for your front door, or as a delicious side dish at your next meal, corn pops up in a variety of ways from mid-late summer through fall.

Corn teaches us the mysteries of life, death, and rebirth. The infamous Fleur-de-lis is the spiritual representation of the corn and is closely related to the higher self or third eye of sacred sight, inspired by French settlers. In France and Europe, this symbol represents the saints and often depicted with a lily, and most prominently in association with St. Joseph and royalty.

In the Americas, the Fleur d li became the symbol of corn, the middle representing the corn cob and the two leaf-like accents representing the husk. Many cultures revered corn as a spiritual element, which is regarded as a symbol of longevity, prosperity, protection, and spirituality. 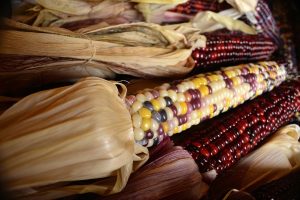 The Corn-mother is sacred to Native American tribes all over the United States and is one of the 7 sacred grains of South America.

There are many stories related to the corn maiden, follow this link http://www.firstpeople.us/FP-Html-Legends/Blue_Corn_Maiden_And_The_Coming_Of_Winter-Hopi.html to read a version of the Hopi Legend of the Blue Corn Goddess

Don’t forget to check out the 4 Cob Butter recipes I offer on this site. The links are available below.

6 thoughts on “The Magickal Aspects of Corn”